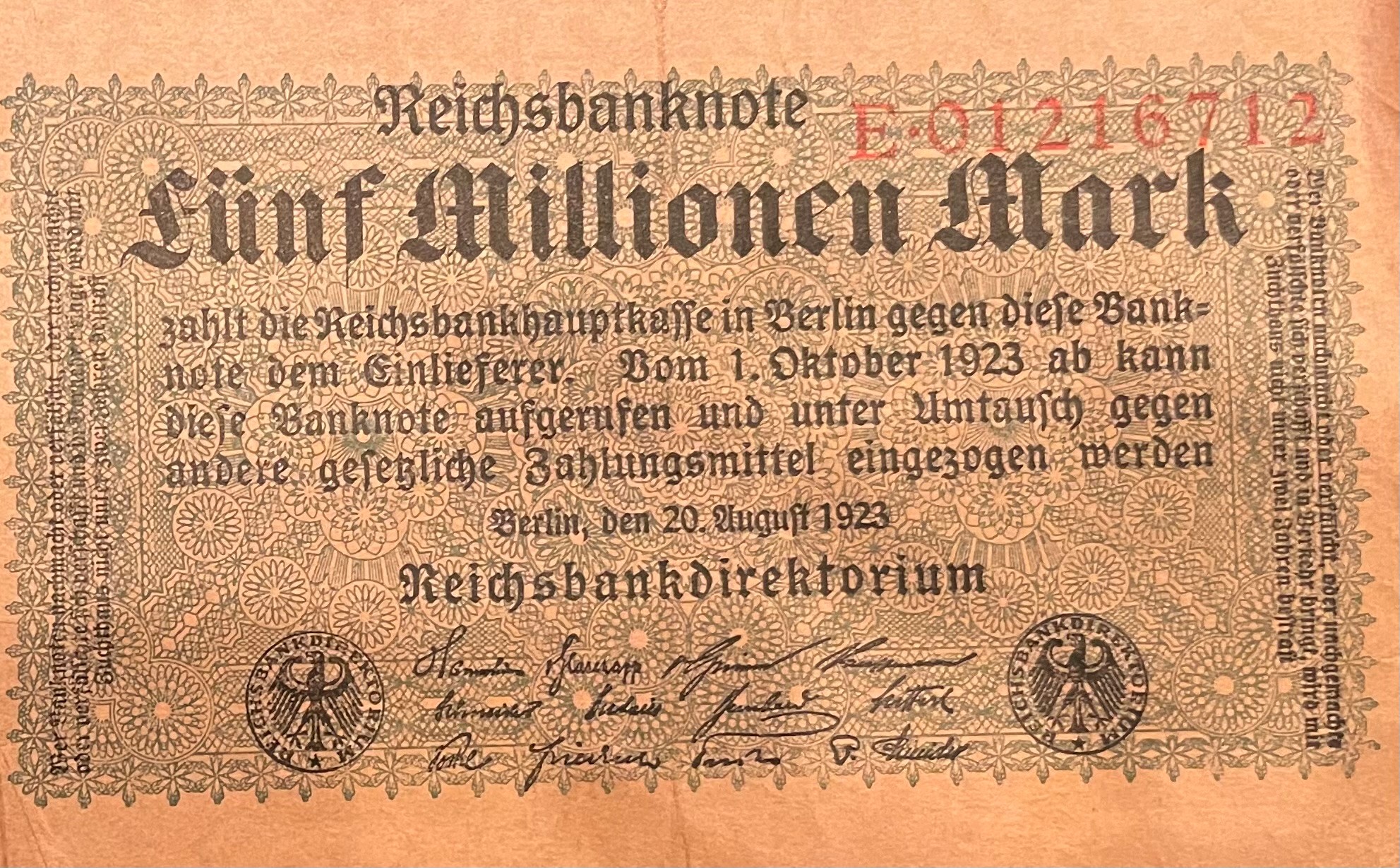 Sounds great, doesn’t it?  Just imagine “being a millionaire”.  Imagine the dead end rut you could find yourself in.  Look up at the picture – that is a “Five Million Mark” banknote – a memento my father picked up in Germany during WWII.  I guess because I now own it that makes me a millionaire.  Well, not exactly.

You see, prewar Germany was going through a period of hyperinflation.  There were millionaires everywhere and they probably needed a wheelbarrow of those banknotes to buy a loaf of bread and some basic groceries.  Canada is experiencing inflation at the fastest rate seen in decades, and there is no sign it will slow down any time soon.

House prices have more than doubled in many areas and with that doubling comes a doubling or tripling of mortgage financing.  People who were living on credit, credit cards, overdraft protection and lines of credit have consolidated those debts into mortgages to qualify to purchase a home, only to reopen the accounts and start to use them again.

We have seen people turn in vehicles to reduce their debt service ratio in order to qualify for bank rate mortgage financing.  The residual from the sale of the vehicle being wrapped into the mortgage or consolidated along with other debts into a second mortgage.  Only to then go and buy another vehicle on another loan – again pushing their debt service ratio over the top.

Incomes have barely increased for many years – typically between 1% to about 3% per year.  Since housing costs have doubled in the last four years and housing costs account for an average of 45% of our incomes, inflation (which isn’t just a mythical “basket of goods”) has realistically been increasing at a much higher rate than government economists and forecasters suggest.

If your house is worth a million dollars, and so is every other house on the street, and you have pay $3,000 a month for housing, in a country where the median income is less than $40,000 and a basket of groceries for a family of four costs $1,200 per month, are you really better off?

“Who wants to be a millionaire” if all you can afford to buy is the very most basic necessities?

This time of low interest, as we have blogged before, is not the time to take on more debt, but it is a great time to tighten up your spending belt and pay debts off – more of your money goes to principal.  If you wait until interest rates increase – which the Fed and BOC have been implying might happen – more of your money will be going to the banks bottom line and less to decreasing the principal of your debt.