Credit Card Use – in Canada 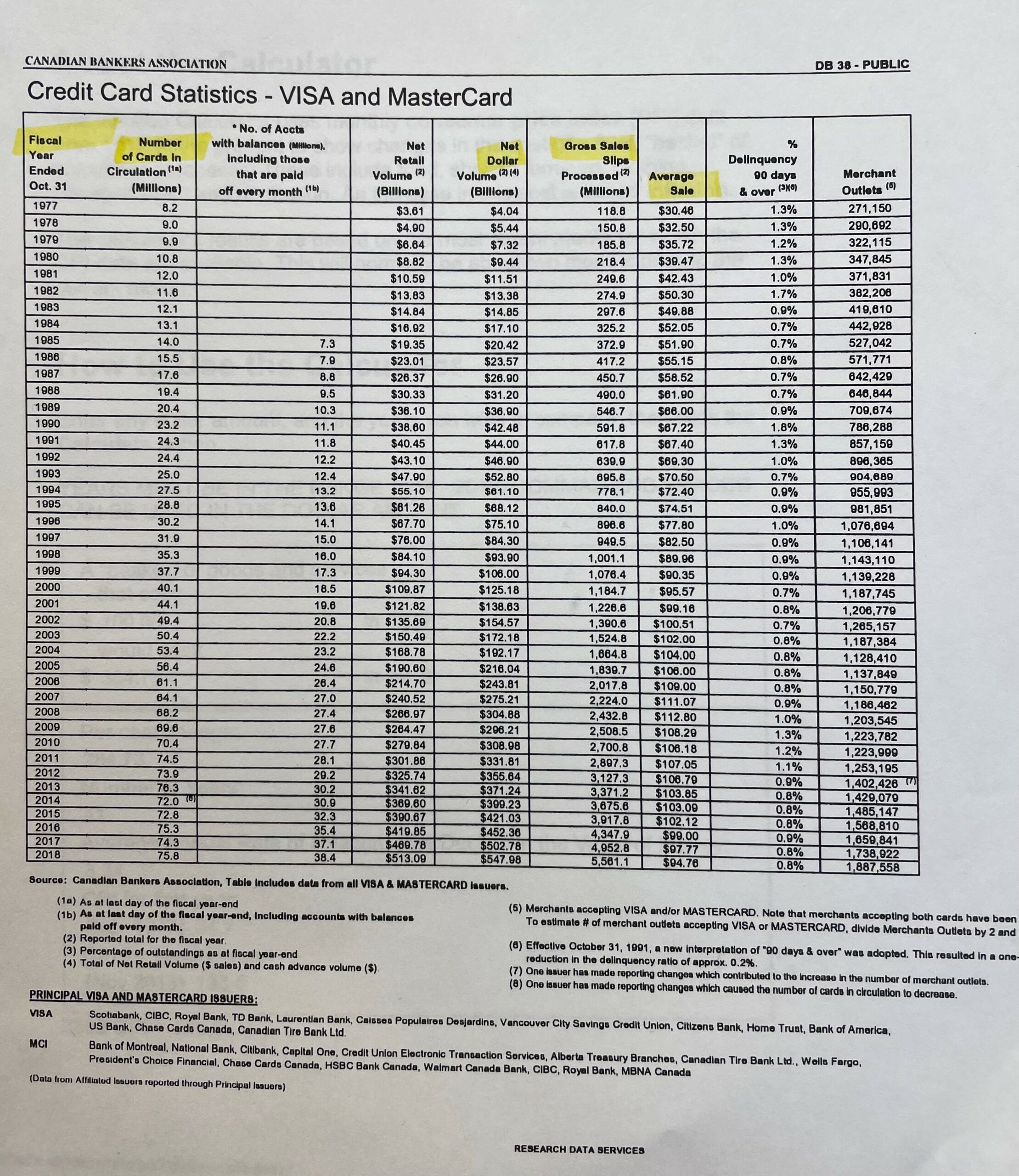 Estimating credit card use in Canada is challenging, especially given the events of the past two years which may have created a boom in online spending.  The Canadian Bankers Association kept records of the growth and use of credit cards in Canada between 1977 and 2018.

These statistics have been quite revealing of the way in which Canadians use credit cards and should have signalled lawmakers to intervene with rules designed to curtail runaway credit abuse, not from consumers but from the lenders.

Here’s what we know from the statistics reported by the CBA and Statistics Canada:

Since the CBA stopped reporting following their 2019 release of 2018 data, we must extrapolate the numbers based on historical data.  We know the population of Canada has grown to now be about 38,213,959.  We can estimate that the number of bank issued credit cards has grown at a rate of 1,470,000 per year bringing the total number of cards in circulation to about 80,210,000 – that remains slightly more than 2 cards for everyone, regardless of age or eligibility, in the country.

The way we use credit cards has changed significantly over the years, according to the CBA in 1977 the average credit card purchase (value) was $30.46 when adjust for inflation that is equal to about $160.42 in 2021 dollars, according to the Bank of Canada’s inflation calculator.  To add perspective that purchase would have been about equal to two tanks of gasoline in 1977 – and by 2021 it would buy about a tank and a quarter.

As they say in the Ginsu commercials “that’s not all you get”.  By 2018 the average credit card purchase was $94.76 when we back that down to 1977 values the average purchase value has dropped to $24.38.  What this information is telling us is that we are using credit cards far more than ever before and we are not using them for big ticket purchases – we are using them for day to day necessities.

Skipping over all the technical data points Canadians have far too many credit cards in circulation, the cost of using credit cards drives up retail prices both at the point of purchase (merchant fees) and in terms if the cost of borrowing.  Each year we are all getting deeper in debt and doing less about it.  At the beginning of the data recorded by the CBA wages were similar (when adjusted for inflation) the cost of living was lower, and people tended to use credit for major purchases.

It is also interesting to review and compare data points from 2008 which led to a major surge in insolvency filings in 2009 (the busiest year on record for LITs).  Since 2008 credit cards in circulation have grown by close to 35% – credit card spending (without an inflation adjustment) has nearly doubled and the average credit card purchase price has dropped by more than 27%.  It appears that quantitative easing has led to a massive increase in debt and consumers have been shielded from insolvency by continued low interest rates and extremely high housing costs.