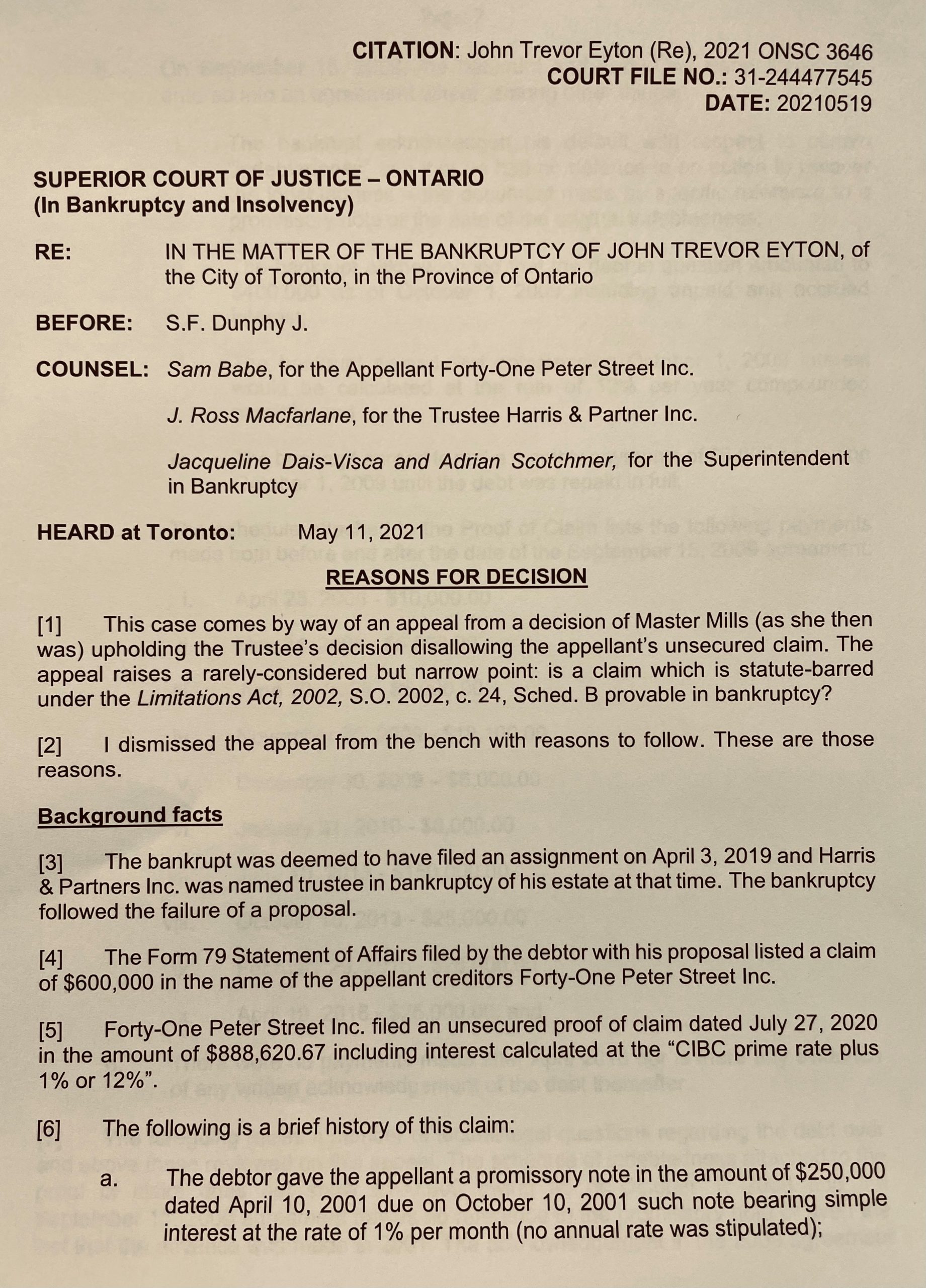 The issue of statute barred debts is one that we have some familiarity with.  In our case, several years ago, we were helping a bankrupt individual to obtain a discharge from an old bankruptcy in order that a Consumer Proposal might be filed for newer debt.

The bankruptcy was some twenty years old, and the bankrupt had failed or neglected to attend to certain duties, therefore remaining “undischarged”.  The trustee of the estate had either passed away or retired, in either event was not available to raise any objection to the discharge of the bankrupt, which would have finalized the old proceeding and paved the way for the debtor to deal with the newer debts.

The Office of the Superintendent of Bankruptcy objected to the resolution and opposed the bankrupt’s motion in the Bankruptcy Court, after locating a significant creditor of the estate and having that creditor support the objection.

We had argued, in our motion, that since the creditors had twenty years, free of the bankruptcy, to collect or attempt to collect the debt but had abandoned all efforts to do so, and since the obligations were then “statute barred” by  the Limitations Act, not only being more than two years past any payment or acknowledgement, but also by being past the fifteen year period for an absolute bar they ought to be set aside and an absolute discharge granted.

The presiding Judge indicated that the matter of the statute bar was not being tried and, while he agreed there may be merit to that argument, set aside a decision asking the parties to come together for a resolution.  Since the bankrupt had no funds to litigate the issue further and the trustee was not about to fund the litigation a negotiated arrangement was agreed upon.

The arrangement allowed the parties to agree that in consideration of the bankrupt accepting that the bankruptcy debts could form provable claims in the proposal a discharge would be granted, and it was.  The proposal was then filed capturing the new debt and advancing the position of the statute barred debt to a higher level than they previously enjoyed.  In the end the proposal was successfully completed.

This year, however, the Appellate Court has made it clear that the trustee’s view, expressed in the motion was correct.  The Judge, S. F. Dunphy, in the case “John Trevor Eyton (Re), 2021 ONSC 3646” decided that a statute barred debt is not a claim provable in bankruptcy, since allowing it as such has the effect of elevating the status of the debt from “uncollectable” to “collectable”, and that is neither the intention of the Limitations Act nor the Bankruptcy & Insolvency Act.

The Judge also noted that the mere fact that the bankrupt (debtor) had included the debt on the Statement of Affairs does not afford the debt recognition as a debt to which the bankrupt is subject.  The debt must still be “proven” by the creditor and part of that proof is that the debt is not only owed but collectable.