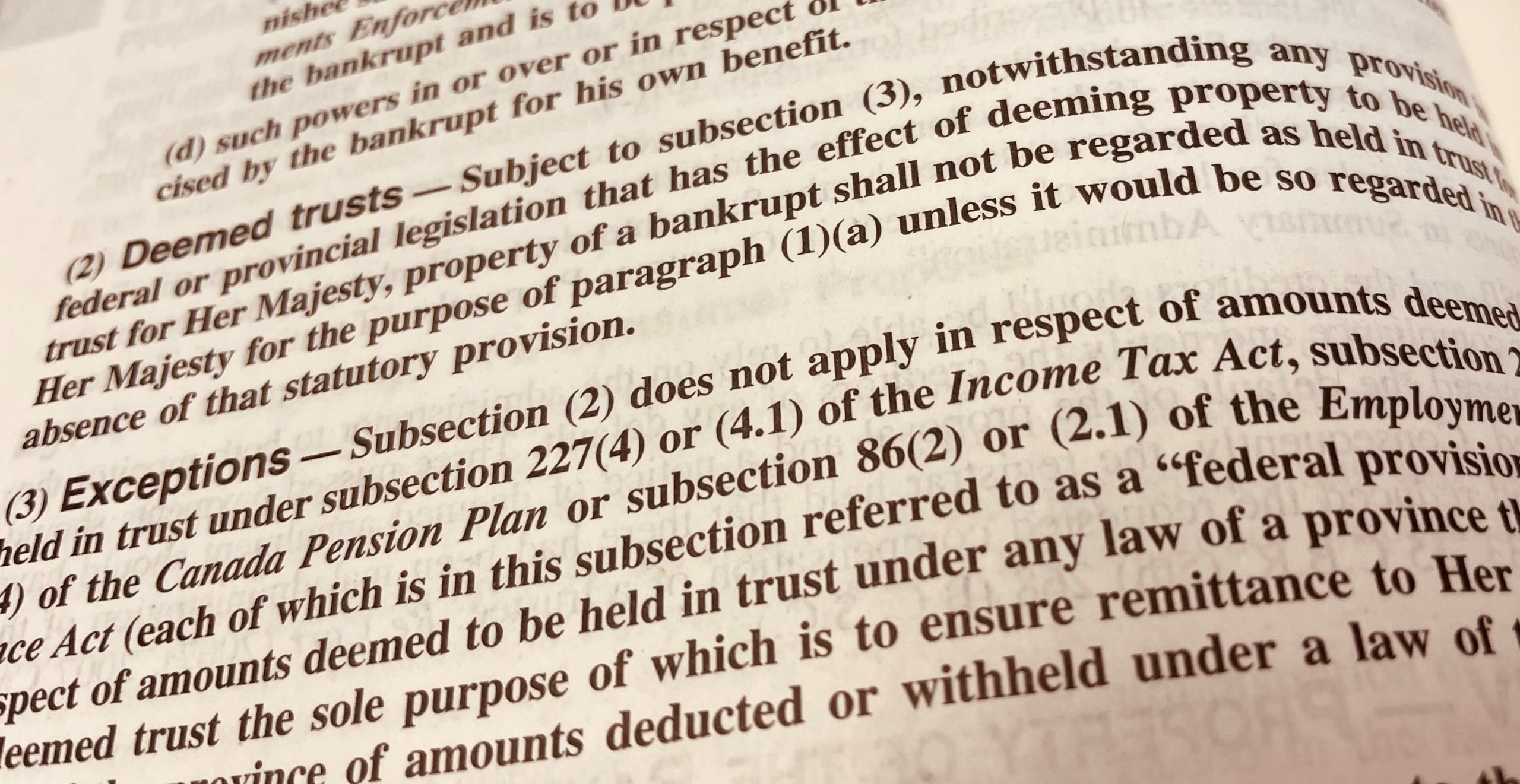 I know it is a controversial issue, which is partly why I chose the topic for a blog article, but as far as I have been able to ascertain Donald Trump never filed for bankruptcy.  Trump was never personally bankrupt but as a businessman he did take advantage of the Bankruptcy Code (USA) and the Bankruptcy and Insolvency Act (CDN) to restructure or eliminate debt in some of his companies.

The media circus of course spent years hammering on the topic of “Trump’s Bankruptcies” without properly explaining any of the details.  It really was not that long ago that illustrious Canadian family enterprises such as the well known and well-loved Eaton’s filed CCAA proceedings and bankruptcies.  However, because of the media’s political leanings the Eaton’s were not exposed to the same repeated scathing and incorrect reporting as Trump.

Setting that aside for a moment, now that I have your attention, Insolvency proceedings are often “used” in order to benefit one, or more, parties and advance their interests.  This is particularly true in larger corporate insolvency filings.  Smaller, closely held corporations do not imbue the directors and shareholders with the array of benefits that are available to shareholders and directors of larger corporate interests.

Section 67(2) of the Bankruptcy and Insolvency Act renders “Deemed Trusts” invalid in an insolvency proceeding, which can have a significant impact on ordinary creditors.  A deemed trust is created when money is collected and held by the company on behalf of the CRA or provincial governments for taxes.  If the company collected HST (in Ontario) but failed or neglected to remit the funds to the CRA a Deemed Trust in favour of the CRA would be created.  As long as the company remains solvent, the CRA can levy a claim on the assets and accounts of the company as “priority” ahead of all other creditors.

Imagine then a company that has generated millions of dollars in revenue and owes millions or hundreds of thousands of dollars to the CRA.  As long as that company continues operations, without the protection of insolvency laws, the CRA may seize accounts and even sell assets, ahead of secured creditors, to satisfy their claim for the outstanding amounts of HST.  However, by filing an insolvency proceeding the CRA looses its priority and is reduced to the same status as an ordinary, unsecured, creditor.  The directors and shareholders, who may not be the same people, are saved harmless and have no personal liability for the tax debt – because, in all likelihood, they had no direct responsibility for the filings.

The same benefit is rarely available to shareholders and directors of small closely held corporations.  While the filing of an insolvency proceeding will still reverse the priority of the CRA, the directors of the corporation will be far more likely to be held personally responsible because they had direct responsibility for reporting and remitting.  As with many other encounters in life there appears to “one for them, and another for us” – yet because of personal involvement and control it does make sense.  When a rich person, such as Trump, files a business bankruptcy there are rarely direct repercussions because of the involvement of so many stakeholders.  In such a case no one person can be directly held responsible, and there are strategic advantages that may enure to the benefit of other corporations owned by the same people that have a stake in the outcome of the insolvency.

While as a small business owner you may not have access to same benefits as a the owners of larger corporations, there are still many benefits to filing insolvency proceedings, either personally or corporately, to reduce or eliminate your exposure to high levels of debt.