Trustee Fees – in Bankruptcies and Proposals. 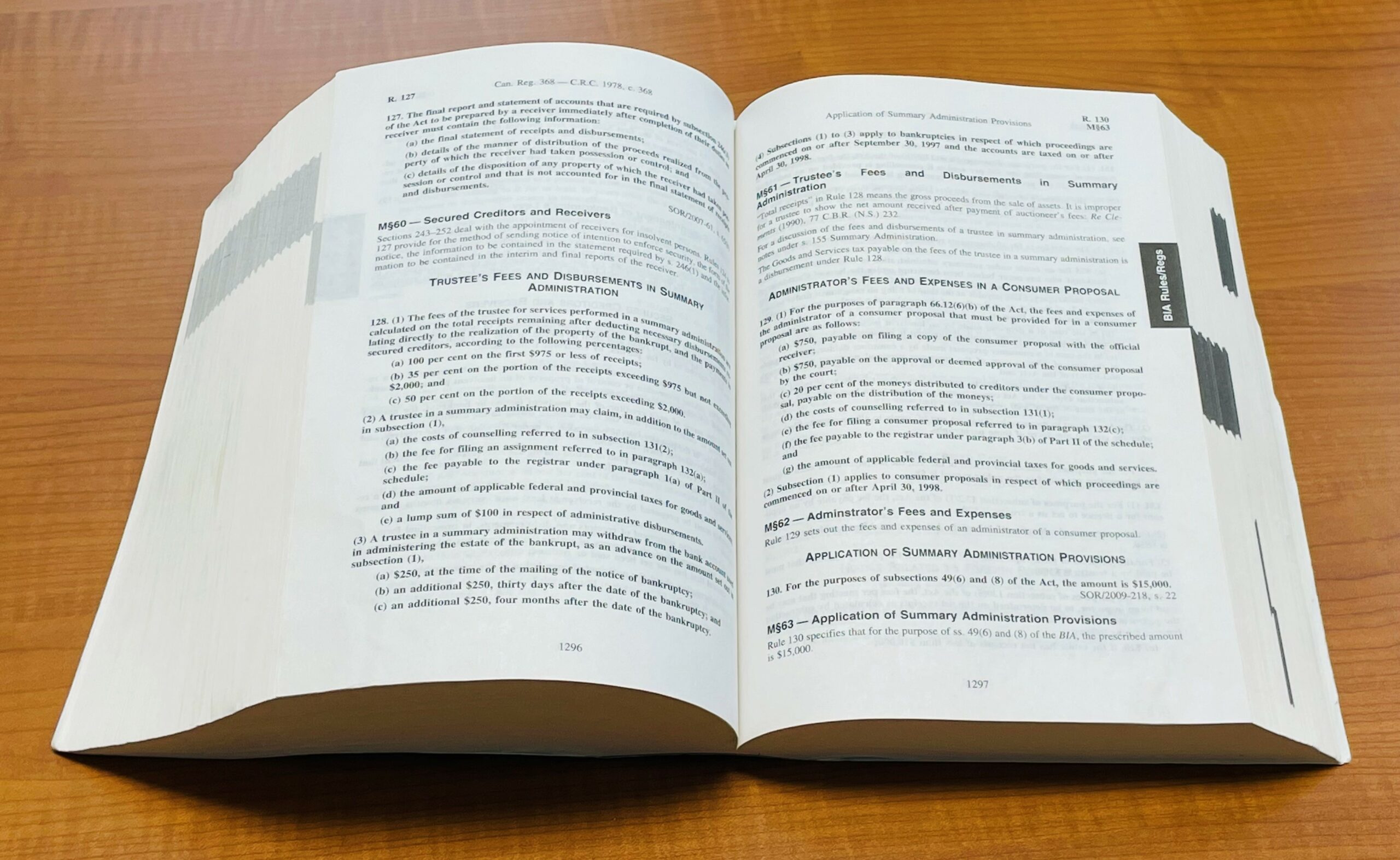 We are not going to break this summary down to each of the line items in Rules 128, and 129, instead we will simplify how fees are calculated.

The most basic way to explain fees, as set out in the Rules, is to say that in a Summary Bankruptcy the Trustee will get the first $2,000 paid into the estate plus 50% of any money collected above $2,000 and up to a maximum of $15,000.  The maximum fee that a Trustee can be paid in a Summary Bankruptcy, assuming $15,000 or more is in the Estate, works out to roughly $9,500 including HST.

Occasionally an Estate might exceed the $15,000 threshold, let’s say a bankrupt had a boat that was sold by the Trustee, and while it was only expected to bring $10,000 at auction, the Trustee received $20,000 from the sale.  In that case the Trustee has two choices; 1.  Ask the Superintendent to convert the file to an Ordinary Estate, which could allow the Trustee to capture a higher fee; or 2.  Notify the Superintendent the estate has received a higher amount of money and agree to cap its fees at the Summary value.

Similar to the Summary Bankruptcy fee structure roughly the first $2,000, without breaking it down by line item, goes to the Trustee’s fees as well as 20% of the rest of the monies paid into the Estate for distribution among the creditors.  If the Proposal calls for Payments of $30,000 ($500 per month for sixty months) the Trustee would get the first $2,000 plus 20% of the remaining $28,000 for a total of $8,588 including HST.

The Trustee could agree to other fee arrangements, but they must be set out in the terms of the Proposal and agreed by the creditors, if the Superintendent found them to be exorbitant the Superintendent could require that they be reviewed by the Court.

In an Ordinary Bankruptcy the Trustee is required to maintain a log of work performed and will charge the time of both the Trustee and Administrative Staff at a previously specified hourly rates.  Typically, an hour is broken down into ten equal parts of six minutes each.  If a staff member spends two minutes on a phone call, they will charge the minimum of six minutes to the Estate.

Fees for Division I Proposal:

Trustee fees in a Division I Proposal may be approached in a variety of ways depending on the complexity of the estate.  Many Trustees, in simpler Division I Proposal Estates, choose to use a formula similar to that provide by Rule 129 and work on a percentage of distributions to creditors.  In more complex matters the Trustee will use a similar approach to that of an Ordinary Bankruptcy, maintaining a record of time spent on the file and charging out employees based on charge-out rates relative to their skills and qualifications.

The Trustee fees in a Division I Proposal are, similarly to Ordinary Bankruptcies, subject to the Superintendent’s review and Taxation by a Court.

NOTE:  Trustee Fees, as set out in the Rules, have not increased in decades.